We came on the Spanish coast at Cabo Villano after a week of thrashing back and forth in the Bay of Biscay without sight of land.

First, only the dropping breeze and our gear beginning to slat in the beam swell, and then from the murk ahead, a wild-sheered, yellow Spanish trawler swung fragrantly across our bows with happy shouts and, rolling hugely, made her way to the southard, leaving us staring at the calmly blinking eye of a lighthouse, dead ahead: Cabo Villano, off Ria de Camariñas.

And then the long wallow for Finisterre, heavy sea and light wind, rolling like a tinker's whore (mythical beast, that) under the grim hills of Facho, Pedro Martir, Ortigal.  Off Isla Onza we picked up the Group Flashing 2 of Isla Cies, off Vigo, and Cabo Sillero kept us guessing all the way down the black shore under the squall clouds to La Guardia.

at December 02, 2021 No comments:
Email ThisBlogThis!Share to TwitterShare to FacebookShare to Pinterest

Reflections on Our Lives During this Pandemic Year.

There's a certain quiet to this season that feels calming, to me.  People are driving less, for one thing, so there are times on the weekend when you can stand in the orchard and hear the hills behind the crow.  That feels like it did when I was young. 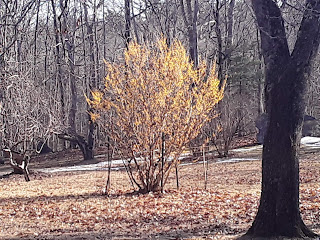 The witch hazel has been glowing dull gold since the beginning of March, and that can keep me entertained while doing nothing but looking - perhaps I've found the contemplative life after all...

Over the year I've had time to design and build a little furniture, some things for Carol's house, and to further other projects like editing and transcribing.  Walks, and a little careful music with friends, but Carol and I do the only singing together since the weather drove us all indoors. 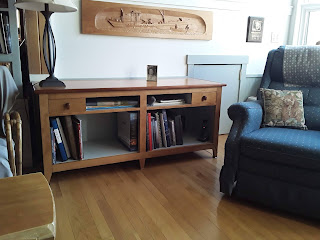 I've had a small flurry of requests for videos (music, stories) and Zoom-participation in musical events.  Carol and I have been making music together far more regularly, too.

We're also feeling even more connected to and grateful for all the friendships, earned or bestowed that the world has given us.

Curiously, the carvings keep trickling out the door at a leisurely pace, even without any gallery showings.  I've been finishing up a few long-stalled pieces, rescued a couple from "death row" and made some new ones.

A year into sketches, research, drawings and studies (carvings in scrap wood) on a commission from a West coast family, I'm ready to put tool to a lovely piece of mahogany - (with all usual trepidation, prayers, and incantations, of course.)

I feel hope, this season, too, that these lost years and months have shown us what we are and can do, both good and bad.

I hope we can raise the energy to make the changes we need to, that we might live to deserve this lovely world.

For Gordon and Carol

I don't know how long
I've been afloat,
I just know that I'm far from home,
facing backwards, lining up
the landmarks I have already passed,
as the sea lifts and drops
and frantic gulls wheel overhead.

Tired, I want to set the oars amidships
and drift for a few moments
watching the waves gnaw
against the bluffs,
but I don't dare,
for the swells and stones
would splinter this dory
as if we were falling
inside that burning building
I saw so many times on television.

I do not rest
but I dip the oars,
bending into them,
again
and again.
"There is a kind land"
I tell myself,
"just beyond the next headland
or surely the one after that."

Thinking about high school, it seemed like one long slog of endless sitting still, wrestling with numbers in math and physics and dates in history - and then they let you out in the open air to do some thrashing around and clear your head - like, say football - they run you around a bit, and then they start stuffing a whole new set of numbers at you.

Numbers irritate me; always have.  They're alien to healthy living and antithetical to good, clean, human mayhem.

That's why I liked swimming as a sport.  I got "my letter" (do they still do that?) all four years in swimming.  It was simple: they'd point to the water and you'd go and do your body-water thing.  You could work like hell, and you couldn't hear them yelling at you, none of all those numbers could penetrate the water, and you could do your breathe-sing-swim-dream thing as long as your strength held out or someone grabbed you by the hair when you made a turn.

It has been good and warm, enjoying the feeling of rounding out a 26-year and 40-year collaboration, with the audiences who have supported us all these years.  We’re not making a big deal that this is our last run, but folks seem very aware of it: standing ovations everywhere, long and loud, a few tears and many personal thank-you-for-the-years, afterwards.

And a scare this afternoon.  Annie caught her heel in a track and fell down two stairs, piling into the audience-chairs, during the sound-check.
She pulled a muscle in her thigh and whanged her head (not hard, she said) but it shook her up.  – Me too.  She tried to swallow it and keep on going – too quick: it kept on coming out – she’d burst into tears and have to stop singing.
The lovely staff at this Audubon Center really supported her with cold packs and aspirin – they even found some Epsom Salts for her bath tonight.
She didn’t seem worried.  She’ll hurt tomorrow, though, and we’ll deal with that.

We chose Johnny Stewart, Drover for our encore.  As we were coming through the second verse (she played flute) I was thinking about how much I’d enjoy the way our voices would feel/sound when we sang “Johnny doesn’t spend much time in town/ Impatient for the Wet to be over” etc.  And we started it, and yes, it was that same warm feeling/sound; we all knowing, loving Johnny, appreciating him…

And the penny dropped and I heard a little voice in my head say: “No more, Robin, no more.  After this year no-one will be here who can make this feeling with you.  No-one will build their particular loving landscape with you again.”

And I could barely sing the rest of the song – choked on some of it, blinked away some, and while Ed and Ann (as always) carried me through, I finally began to feel the loss.

at November 28, 2017 2 comments:
Email ThisBlogThis!Share to TwitterShare to FacebookShare to Pinterest

Excerpt from my notebooks

We ended up singing in the fo’c’s’le of the old schooner most of that night.

We had Mac’s sweet, soaring Tenor, John and Nellie and their dates who had no fear of harmony at all, the boy, who knew all the choruses, and a lot of verses he shouldn’t have, and one lonesome mandolin-player off a yacht up the wharf.  We’d heard him in a lull and chased him down with the shipyard skiff.  He said that all our howling made him want to play.

We sang the moon up over the shipyard and across the spring-stay of the schooner, down between the ketch’s masts and gone with the rolling hump of tide down the bay.

It might not have been Art to some, but it was what we had and all we needed.

I lay in my berth in the warm fo’c’s’le, thinking about my friends in the islands.  With the isolation and the scarcity of paying work, it’s not hard to get depressed and bitter.  But wouldn’t that be true of any rural area in a harsh land where you can get a glimpse of the way more fortunate people live?

But that doesn’t turn people into beer-guzzling animals, like the preacher said.  Casting around among the folks I knew, I couldn’t think of many that would fit that description.

Ah, the world is full of islands, oh my soul.
And we’re each a lonely island in a raving dread of sea,
Carrying our loneliness like a dark and windy hole
that the glory of creation cannot fill.

So each of us will fill it as we can,
With friends or music, dreams or work or beer
Or even God.  There’s probably no single, perfect way.

I fell asleep, feeling grateful for the music, and for the boy on the settee across from me where the last chorus flung him,   and for the schooner in the going tide, and the water round us all, and the water all around the world, always moving.

First thing I heard the next morning was the coffee pot, rolling above the mumble of the schooner’s big wood stove.  Then I smelled the bacon, and I knew Mac was aboard, so I rolled out through the curtain.
Mac poured me coffee, nodded toward the sleeping boy, and we went up on deck.

We set our mugs down on the forward house and stood on the frosty deck-planks warming our hands at the stove-pipe.
The harbor was quiet around us.

He said: “Remember when I brought that sardine-carrier in here with the busted stem?”
“King Fisher,” I said.
“Yeah.  You brought your little buddy aboard.  And you brought him along when we made the first trip of fish after that… out of Sabbathday, wasn’t it?”
“Yeah, that was a good time, Mac.  He was about seven, then,”
“Remember what he always called the carrier after that?”
“Yeah – hah: he called her ‘the house of singing.’”
“Uh huh.  You know, he and I had a big talk about you on my boat over supper last night.”
I didn’t say anything, and he went on:
“He told me that you and that preacher went thirteen rounds, and you got pretty stove up.”
I said: “Look, Mac, you and I know I’m a fool, but that bastard painted it all over me.  And the boy saw all of it.”
He laughed.
“Ah, hell, we’re all fools in God’s garden.  But he told me that he was worried about your immortal soul – did you know that?”
“Never,” I said.  He turned and faced me.
“Well, he was afraid you’d lose it – your immortal soul –-  if you ever stopped singing.  Now, how about that?”
He watched me a moment, then he smiled and said “Let’s go down.  I’m hungry.”
And we went down into the house of singing.